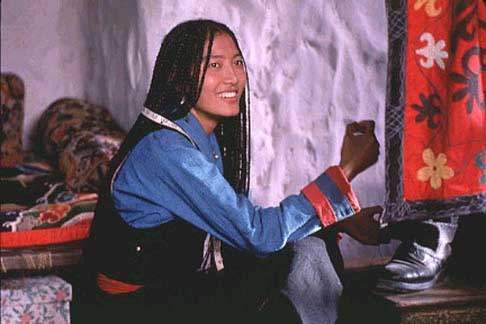 When the Hollywood celebrity Brad Pitt kissed her hand during the first scene of her acting career, Lhakpa Tsamchoe was perhaps too excited to realize that she had become the first Tibetan woman to take a lead role in a Hollywood production.

" My first scene I will never forget," says Lhakpa Tsamchoe, sitting in the chair at a Boulder bookshop. " In my previous life I must have done something good to be part of the " Seven Years in Tibet," adds Lhakpa, as she makes herself more comfortable amid the tall bookshelves.

A portrait of the Dalai Lama with the teenage Karmapa Lama rests on the table in the front lobby of the bookshop, where Lhakpa's husband conducts Buddhist philosophy and meditation class which she will help teach. An incense smoke, rising in front of the portrait, fills the room with fragrance.

Lhakpa Tsamchoe, 30, who got married just last year, is the first Tibetan woman to break into the international movie scene. She played key roles in award- winning movies such as the "Himalaya" and the "Seven Years in Tibet." Besides being an actress, Lhakpa was also associated with the Tibetan youth freedom movement in exile. Twice she was popularly elected to serve the Tibetan Youth Congress' executive body.

" I never thought they (directors) will choose me," continues Lhakpa, with a smile on her face. " But when I heard, after two months that I have been selected, I was so happy".

But what brings this Tibetan actress from the other side of the world to the small bookshop in Boulder?

" Buddhism has so much to teach to humanity," says Lhakpa, who met and married in India the American Buddhist, Michael Gregory, 33, of Breaken Ridge, in November last year and moved to Colorado. " Buddhist teachings are for all humanity."

And that is why the newly married couple opened The Tibetan Buddhist, a weekly Buddhist philosophy teaching at the used-book shop at 30th Street in Boulder. It is a long way for Lhakpa who was born in a small Tibetan refugee settlement in southern India. Unlike many of the Tibetan refugee children, she had the fortune to receive modern education at a prestigious public school and a premier university in the southern Indian city of Bangalore.

" It was at a discotheque where it all started," says the sharp-faced actress, recollecting the night when she was given an interview invitation by the casting director of "Seven Years in Tibet." The casting team had been visiting the Tibetan settlements in India and Nepal.

" I was scared, but everything went so smoothly," says Lhakpa, remembering her first scene in the movie, and the first of her acting career, where Brad Pitt comes galloping on a horse, and takes the hand of the Tibetan girl, and kisses it.

" Pitt is a comfortable man to work with," Lhakpa continues with a smile, " But he looks much more cute in the film."

With no background in theatre and acting, Lhakpa says, she had the feeling that she would struggle to fit the role. But all scenes turned out to be pretty simple, she adds. The " Seven Years in Tibet" tells the adventures of the Austrian mountaineer, Heinrich Harrer, in Tibet during the World War II, and according to a box office survey, 1.2 billion people have seen it.

" But I didn't expect it to win awards," says Lhakpa, shaking her head. "But the other movie, I did expect."

Lhakpa played yet another memorable role in the French production, "Himalaya," which received an Academy Award nomination for the Best Foreign Film. The film captures the fast disappearing traditions of a remote Tibetan culture.

" Working for the film 'Himalaya' was very difficult- physically and mentally," says Lhakpa, describing the shooting in the forbidden Dolpo region of Nepal under the most challenging of conditions. " The shooting was supposed to be for 3 months, but it went on for 8 months,"

But the hard work paid off. " It became more successful than 'Seven Years In Tibet,'" says the actress, adding both the movies have raised tremendous awareness about the plight of the Tibetans in Chinese-controlled Tibet.

Lhakpa's parents were among the 80,000 thousand Tibetans who fled their Himalayan homeland into exile, in 1959, led by their God-King, the Dalai Lama. The determination to fight for Tibetan freedom, says Lhakpa, is in their "family's blood". Her father is a member of parliament in the exiled Tibetan government and her mother had been an activist in the Tibetan Women's Association.

" It's going to take time, but nothing will remain the same," says Lhakpa, supporting the nonviolent strategy of the Dalai Lama, and expressing optimism that the Tibetan issue will be resolved eventually.

" Autonomy, that's the biggest hope," emphasizes the actress, who had led the Tibetan youth movement while attending university in India. " We got to be realistic.

" Do you think, all the Chinese people - 7.5 million in Tibet- are going to go back to China? Impossible!" says Lhakpa.

Though optimistic about the Tibetan freedom movement, Lhakpa is critical of the younger Tibetan generation - especially the generation that is growing up in the West.

" Tibetan youth in the West are losing touch of our unique culture," says Lhakpa " and this is reflected by the way young Tibetans take interest in Buddhism though lately more young Tibetans seem to be taking interest in their religion."

Lhakpa is a staunch follower of Tibetan Buddhism, and goes into three-day retreat every month to " calm my mind more".

" It's important to have your mind under control and every thing's going to be great," says the young Buddhist actress, adding she also has a plan to go into three-year retreat, which is considered an important mind-control training in Tibetan Buddhism.

" She would often talk about Buddhist philosophy, and we would tease her that she might become a nun soon," says Tsering Gurmey, 32, Lhakpa's high-school friend, who now lives in Boulder. She may not have become a nun, but Buddhism did play a pivotal role in Lhakpa's choice of her husband.

" If not for Buddhism, I don't think I would have married him," says Lhakpa, looking at Michael, who is welcoming his new students at the entrance of the bookshop.

Michael, a former monk, had been a student of high Tibetan lamas, including the 16th Karmapa, the third highest lama in Tibetan Buddhism.

" I try to teach them the real and authentic teachings of Buddha as recorded in Tibetan Buddhist scriptures, " says Michael, showing his English translated copies of the original Buddhist scriptures in Tibetan that he borrowed from the Sakya Monastery in India. " Changing the original teachings of Buddha to suit a particular group would be changing the path to enlightenment."

As the couple's interest in Buddhism brings them to Boulder every Thursday, Lhakpa looks forward to going back to India and live a life of contemplation, at least for three years. Does that mean she is ending her career in cinema?

" No, I will be happy to take roles in more films if I get offers. But worldly ambitions must be complemented by spiritual refinement."

back to Tibet page