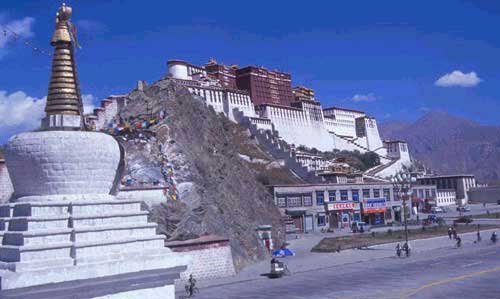 The Guardian, as published in The Age, Melbourne 26 Oct 2002

It is early morning outside the Potala Palace, the former home of the Dalai Lama, pilgrims from all over Tibet have begun the sacred circuit --and the Chinese flag is flying in the breeze. Nomads with sunburnt fares as dark as their cloaks, Khampa ex-warriors with red tassels in their hair, farmers with leggings, their wives with striped aprons, plus ordinary folk from the city, old and young, walk briskly in the grey dawn. Many twirl their prayer wheels, some prostrate themselves on mats, and one or two even drive a sheep before them around the circuit. The lucky animal is then allowed to live to the end of its natural days.


It is an advertisement of sorts for the religious freedom that China says is fully allowed in Tibet. "How can the foreign press accuse us of suppressing religion,'asks an official, "when you can see it in the streets?" The Potala receives an average of 800 pilgrims a day. It works out at about a 10th of the entire Tibetan population every year. However, the Chinese flag flying boldly - provocatively, even - in front of the Potala is a reminder that this is freedom with limits. The vast stretch of paved space behind it has been built since I was last in Lhasa. With its flag-pole and ornamental lights, it is a miniature Tiananmen Square exported to Tibet.


A Chinese official confirms for the first time unofficial reports that in August 1999 the flag was targeted by a pro-independence Tibetan activist. "Of course the Dalai (Lama) clique is trying to obstruct the modernisation of Tibet,' exclaims the region's planning director, Wang Dianyuan. "Didn't they try to blow up the flagpole two years ago?" The 'clique' is also blamed for earlier explosions at the gate of a government headquarters in Lhasa, and outside the home of a senior pro-Beijing official.


Virtually all Tibetans in the region or abroad who call for independence accept the supreme authority of the Dalai Lama, who has condemned any violence. However, there is a radical minority in favour of stronger action.


Another official admits that large numbers of Tibetans still support the Dalai Lama. "That many people believe in the Dalai Lama is well known,'says Tu Deng, the Tibetan head of the religious affairs committee that enforces government policy. "Our main task is to help people understand his real character." Mr Tu describes the Dalai Lama as "a splittist and an enemy of China" whose picture is therefore banned in public places. This has created a bizarre situation in which the Chinese admit that the Dalai Lama is still the spiritual leader of Tibetan Buddhism but have airbrushed him out of the picture.


After performing the sacred circuit, the pilgrims file through the Potala home of successive Dalai Lamas since the 17th century, in the prescribed clockwise circuit. Foreigners and Chinese tourists are conducted rudely against the flow in an uneasy mix. with one group admitted in the morning and the other in the afternoon.


In front of the most holy chapel in the Potala, a nomad from the plateau hands her tiny baby wrapped in a sheepskin to an older child, and prostrates herself on the floor. A smartly dressed young lady from Lhasa lies down alongside. Both then climb a wooden ladder to touch their foreheads against the statue of Arya Lokeshvara dating from the seventh century.


A party of Chinese tourists clamber up noisily behind, one of them leans against the shrine and takes a call on his mobile. "Some monks in the monasteries tell us this is just a performance for the tourists," says another foreigner who travelled widely without an official guide. It is generally assumed that some monks are spying for the authorities.


It is not as simple as that. On the roof of the Lhasa's Jokhang temple, Tibet's most sacred site, groups of monks are disputing theology with an enthusiasm that can hardly be feigned. Two seated monks question a third who stands before them, clapping his hands in triumphant emphasis when he concludes a point. 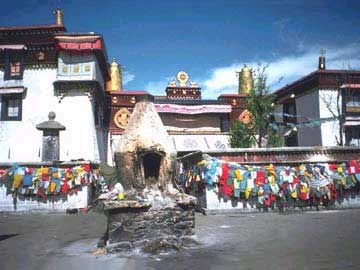 Nowhere else in the People Republic of China does Beijing have to cope with a population so overwhelmingly attached to a non-communist ideology, and the monasteries are the focus for this central contradiction in Chinese rule. Tibet's religious character has survived a decade of persecution during the Cultural Revolution (1966-76) when almost every monastery was destroyed by Red Guard factions among the Chinese and a much smaller number of radical Tibetans.


I am given official figures claiming that before the 1959 rebellion when the Dalai Lama fled Tibet, there were 110,000 monks and nuns living in some 2000 monasteries across the region. Now there are said to be 47,500 monks and nuns in 1700 religious establishments which have been rebuilt with Chinese state funds and offerings by local communities. The figures are unreliable. An earlier Chinese version puts the original figure of monasteries at 2700. Exiles claim there were thousands more before the mass destruction which began after the 1959 rebellion and culminated in the Cultural Revolution (1966-68).


The number of monks is lower now because in the past, officials explain, under the Dalai Lama's "feudal rule", families were forced to send sons to the monasteries. There is also a ban on admitting people of 15 or under to become acolytes because they should be "receiving normal education". Like all officials interviewed, Mr Tu often speaks in set formulas as if from a manual. "Through 'patriotic education' the monks have learned 'what is not allowed' and 'what is illegal'," he tells me. Asked for clarification, he explains that monks teaching children is "not allowed". Monks demonstrating with pro-independence slogans is "illegal". Mr Tu dismisses stories of brutality and torture.'A person is responsible for his own law-breaking, " he says calmly. "Our responsibility is to look after the great majority of (law-abiding) lamas."


The London-based Tibet information Network says it knows of at least 210 monks and nuns still in jail for taking part in peaceful demonstrations over the past decade. Merely to shout a pro-independence slogan may earn a sentence of eight years. There are frequent stories - routinely denied by Beijing - of inmates being beaten.


Life seems more relaxed in Lhasa than during my last visit in 1994 when memories were fresh of pro-independence marches and the 1989 imposition of martial law. The Chinese military maintains a low pro-file, although Lhasa houses the massive headquarters of half a dozen different commands- from border guards to riot troops.


In the square before the Jokhang temple, where monks and nuns once marched, two bored policemen sit on chairs barking through a loudspeaker at anyone who pauses for too long. A Beijing magazine this month has repeated the standard line that the Dalai Lama can "return to the embrace of the motherland if he gives up his independence demand". But asked if the Dalai will ever return, Mr Tu replies contemptuously that "he has now sunk in the mud too deep to renounce all he has done in the past".


The Dalai Lama's nuanced proposals, made over the past 15 years, for Tibet to enjoy something short of independence are dismissed as insincere. His recent illness has also raised questions about the future in the event of his death. China would undoubtedly seek to control the choice of his next "reincarnation", as they did in 1995 after the death of the Panchen Lama, Tibet's second spiritual leader.


The new boy Panchen is now being educated in Beijing "in religious studies and science", it is said in Lhasa. He is being groomed to play a political role which could one day supplant the paramount status of the Dalal Lama. Yet official statements have made it clear that the dominance of Buddhism in Tibet, however tightly controlled, is seen as a continuing threat to Chinese-led "stability". And that threat will only diminish if the economy of Tibet - still the poorest region of China - can be transformed.

back to Tibet page