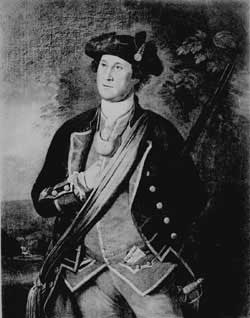 George Washington, the Father of our Country, is well known to Americans for the accomplishments of his adult life: commander-in-chief during the American Revolution, statesman, and President. Few, however, are familiar with his youth or know anything more about it than perhaps the folklore surrounding the hatchet and the cherry tree incident. Yet, possibly his younger years form the most important time for our national hero, for often it is what occurs in one's youth that determines what one becomes as an adult. Or, in the words of a contemporary proverb, "As the sapling is bent, so goes the tree."


It is for this reason that the account of not only what happened to, but of what happened around the young George Washington during the battle on the Monongahela is so important. Washington was only a 23 year-old colonel at the time of the battle and certainly the details of this dramatic event helped to shape his character and even confirmed God's call on this young man. Washington's part in the battle of the Monongahela is undisputably one of the most significant events of his early life--his life literally hung in the balance for over two hours. Fifteen years after the battle, the chieftan of the Indians Washington had fought sought him out and gave this account to Washington of what had happened during the battle:


"I am chief and ruler over my tribes. My influence extends to the waters of the great lakes and to the far blue mountains. I have traveled a long and weary path that I might see the young warrior of the great battle. It was on the day when the white man's blood mixed with the streams of our forest that I first beheld this chief [Washington]...I called to my young men and said...Quick, let your aim be certain, and he dies. Our rifles were leveled, rifles which, but for you, knew not how to miss--'twas all in vain, a power mighter far than we, shielded you...I am come to pay homeage to the man who is the particular favorite of Heaven, and who can never die in battle."


Today, few have ever heard about this important story. However, it has not always been the obscure account that it has now become, as suggested by the fact that I referenced more than three dozen older historical texts for this current work; and those texts were merely the ones in my own limited, personal collection.


The historical sources utilized for this work are diverse and range from personal records of the participants in the battle to details provided by Benjamin Franklin in his autobiography, as well as the research of prominent historians of earlier periods. I have included some exerpts from the original texts, some of which were published more than 160 years ago. When woven together, they not only provide an accurate and well documented account of the battle, they also supply exciting and informative reading.


Additionally, several of the illustrations which appeared in those earlier works are included in this one. Other appendixes are provided at the conclusion of this work: a map of the battle area, a time line of the events leading up to and surrounding the tragic battle, and a listing of the primary and secondary sources utilized in this work.


It is my wish that through this account you will not only have a greater appreciation for the Father of our Country, but also a profound awe of the manner in which God soverignly selected him and directly intervened in his behalf, preserving him for the important task of helping to bring forth, guide, and stabilize this great nation. The words spoken long ago by God to his beloved servant David seem to be descriptive also of the manner in which God used George Washington:


"I took you..to be a ruler over my people...I have been with you wherever you have gone...Now I will make your name like the names of the greatest men of the earth." (1 Chronicles 17:7-8,NIV)


May this account once again become widely celebrated throughout America!


To contact David Barton or order a copy of this book write;

From the Back Cover of The Bulletproof George Washington:

George Washington's part in the July 9th, 1755, battle during the French and Indian War is indisputably one of the most significant events of his early years: his life literally hung in the balance for over two hours. This dramatic event helped shape his character and confirm God's call on him.


During the two-hour battle, the 23 year-old Colonel Washington had ridden to and fro on the battlefield, delivering the general's orders to other officers and troops. The officers had been a special target for the Indians. Of the eighty-six British and American officers, sixty-three were casualties. Washington was the only officer on horseback not shot down.


Following the battle, Washington wrote a letter to his brother in which he readily and openly acknowledged:


"By the all-powerful dispensations of Providence, I have been protected beyond all human probability or expectation; for I had four bullets through my coat, and two horses shot under me, yet [I] escaped unhurt, although death was leveling my companions on every side of me!"

back to: The Mystical George Washington