The Boy Who Lived Before

You Tube Video of Cameron 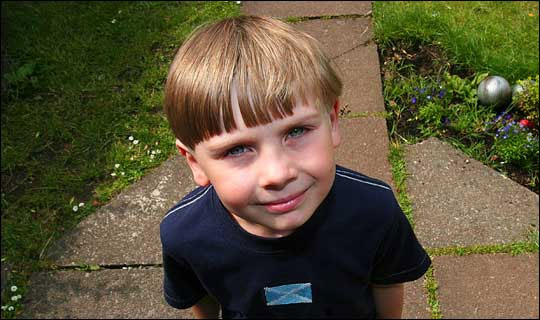 Another Life ... Cameron Macaulay Told Stories Of His Other Family

Little Cameron Macaulay was a typical six-year-old, always talking about his mum and family. He liked to draw pictures of his home too - a long single-storey, white house standing in a bay. But it sent shivers down his mum's spine - because Cameron said it was somewhere they had never been, 160 miles away from where they lived. And he said the mother he was talking about was his "old mum." Convinced he had lived a previous life Cameron worried his former family would be missing him. The Glasgow lad said they were on the Isle Of Barra. Mum Norma, 42, said: "Ever since Cameron could speak he's come up with tales of a childhood on Barra. "He spoke about his former parents, how his dad died, and his brothers and sisters. "Eventually we just had to take him there to see what we could find. "It was an astonishing experience." Cameron's journey to find his previous life is now the subject of a spooky TV documentary. Norma said: "His dad and I are no longer together but neither of our families have ever been to the island. "At first we just put his stories down to a vivid imagination." Then life took a more sinister turn as Cameron started to become distressed at being away from his Barra family. Norma said: "It was awful and went on for years. "When he started nursery his teacher asked to see me and told me all the things Cameron was saying about Barra. He missed his mummy and his brothers and sisters there. "He missed playing in rockpools on the beach beside his house. "And he complained that in our house there was only one toilet, whereas in Barra, they had three. "He used to cry for his mummy. He said she'd be missing him and he wanted to let his family in Barra know he was all right. "It was very distressing. He was inconsolable."

Memorable view ... Isle of Barra which Cameron said was his former home

“He wouldn’t stop talking about Barra, where they went, what they did and how he watched the planes landing on the beach from his bedroom window. “He even said his dad was called Shane Robertson, who had died because ‘he didn’t look both ways.’ “I assume he means knocked over by a car but he never says that. “One day his nursery teacher told me a film company were looking for people who believed they had lived before. “She suggested I contact them about Cameron. My family were horrified. There was a lot of opposition to it. I’m a single parent so it was me and Cameron’s brother Martin, who is only a year older than him, who were being badly affected by this. “Cameron wouldn’t stop begging me to take him to Barra. It was constant. “I contacted the film company and they followed Cameron’s journey to Barra. “We had child psychologist Dr Jim Tucker, from Virginia, with us. “He specialises in reincarnation and has researched other children like Cameron. “When Cameron was told we were going to Barra he was jumping all over the place with excitement.” The family flew from Glasgow last February and landed on Cockleshell Bay an hour later. Norma said: “He asked me if his face was shiny, because he was so happy. 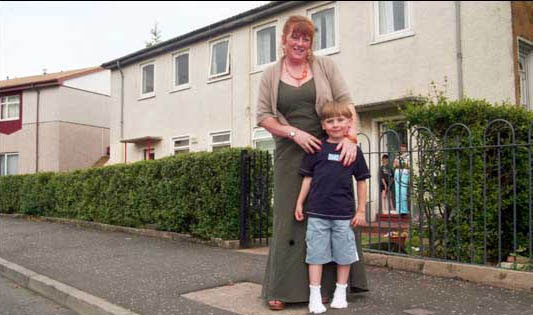 Cameron and Norma ... he says 'if you die you come back again'

“When we got to the island and DID land on a beach, just as Cameron had described, he turned to Martin and me and said, ‘Now do you believe me?’ He got off the plane, threw his arms in the air and yelled ‘I’m back.’ “He talked about his Barra mum, telling me she had brown hair down to her waist before she’d had it cut. “He said I’d like her and she’d like me. He was anxious for us to meet. “He also talked about a ‘big book’ he used to read, and God and Jesus. “We’re not a religious family but his Barra family were.” The Macaulays booked into a hotel and began their search for clues to Cameron’s past. Norma said: “We contacted the Heritage Centre and asked if they’d heard of a Robertson family who lived in a white house overlooking a bay. “They hadn’t. Cameron was very disappointed. We drove around the island but he didn’t see the house.

“Then we realised that if he saw planes land on the beach from his bedroom window, we were driving the wrong way.” Next the family received a call from their hotel to confirm that a family called Robertson once had a white house on the bay. Norma explains: “We didn’t tell Cameron anything. We just drove towards where we were told the house was and waited to see what would happen. “He recognised it immediately and was overjoyed. “But as we walked to the door all the colour drained from Cameron’s face and he became very quiet. “I think he thought it would be exactly the same as he remembered it, that his Barra mum would be waiting for him inside. He looked sad. There was no one there. The previous owner had died but a keyholder let us in. “There were lots of nooks and crannies and Cameron knew every bit of the house — including the THREE toilets and the beach view from his bedroom window. In the garden, he took us to the ‘secret entrance’ he’d been talking about for years.” Researchers also managed to track down one of the Robertson family who had owned the house. Norma said: “We visited them at their new address in Stirling, but couldn’t find anything about a Shane Robertson. “Cameron was eager to see old family photographs in case he found his dad or himself in any. “He’d always talked about a big black car and a black and white dog. “The car and the dog were in the photos.” Since the family returned to their home in Clydebank, Glasgow, Cameron has been much calmer. Norma said: “Going to Barra was the best thing we could have done. “It’s put Cameron’s mind at ease. He no longer talks about Barra with such longing. “Now he knows we no longer think he was making things up. “We didn’t get all the answers we were looking for — and, apparently, past life memories fade as the person gets older. “Cameron has never spoken about dying to me. But he told his pal not to worry about dying, because you just come back again. “When I asked him how he ended up with me, he tells me he ‘fell through and went into my tummy.’ “And when I ask him what his name was before, he says, ‘It’s Cameron. It’s still me.’ “I don’t think we’ll ever get all the answers.” end

You Tube Video of Cameron

Much more on Karma and Reincarnation and NDE
(Including: "Is This Little Boy Proof of Reincarnation" the story of a former F-4U pilot in WWII)