Around the World with Norman Rockwell
Asia 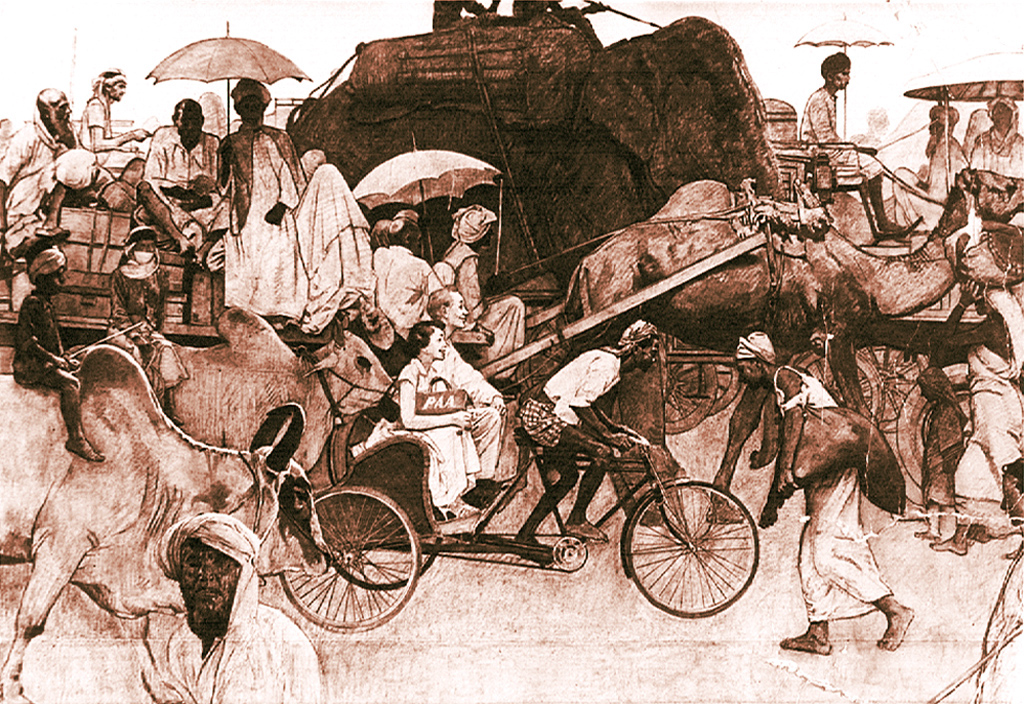 "Like all holy cities, they have a few beggars around throughout the town. We also saw the fakirs. We had one of them give us a demonstration. He sat on a bed of thorns, and being quite thin, it looked like the thorns were going right through him. There were a few men sitting on streets who were lepers. Naturally, we were told to stay away from them and not to touch them for fear we would catch leprosy.

The Ganges river rises during the rainy season and floods the temples. There are markers on the wall showing how far up the river has risen, reaching as high as 25 feet. In fact, some of the temples which at one time were out of the water are now almost completely buried. All you see is the dome sticking out of the water.

In downtown Banares tourists can pick up quite cheaply many fine pieces of material, such as madras cloth or silk saris which the Indian women wear. Many women tourists are taking saris home and making dresses and blouses, etc."

ROCKWELL: "The Clarks Hotel was very British, must have been just the way it was during the time the British controlled the country, clean, neat, and I am sure any American would feel at home there. I wouldn't say the same thing about the native quarter. It was very fascinating, in fact, it seems to me, whenever the country is poor or the natives live in their original state, it is much more picturesque and interesting."

BILL HOUSE: "Going back to the airport we saw our first elephant, our first and only elephant on the whole trip. There were two boys riding it, and we had them stop and pose for several pictures. We returned from Banares to Calcutta, and the next day we ventured on to Rangoon which is about a two or three hour flight from Calcutta. Rangoon, Burma [Myanmar] is a picturesque little town, you begin seeing a lot of priests in their colorful orange robes, carrying big red parasols. The two large temples are the Sule Pagoda and Shwedagon Pagoda. Both of these have large gold spires. They get this way because the worshippers buy gold leaf and rub them on to the domes. At the top, however, there is a six foot section which is made of solid gold bricks. When visiting these temples you have to take your shoes off and walk up endless steps, dodging puddles of water, and by the time you return to the street your socks are quite filthy. These temples are so ornate and beautiful that they are really hard to describe. It must have taken years and years to build. On the way up to these temples you find shops on both sides of the steps where you can buy anything from combs to little worship items to take on up to the temple.

The Burmese women are quite pretty and petite, and they have very fine features. One of the Pan Am office girls helped us by posing by a temple wearing a longyi which is their native dress. You will also find the women squatting instead of sitting while smoking tremendous cigars. One interesting thing we saw was a woman nursing a baby and at the same time smoking one of these huge cigars."

ROCKWELL: "One of the things that impressed me coming from India to Burma was the change in the status of women. The women in India are kept at home and are not equal to the men, and the few you do see on the streets are very timid, the taking of photographs is very much resented. When you get to Burma this all changes. The women work alongside the men, and the men seem to respect them. The family life is right out on the streets.You can see the children, mother and father walking together, and it seems very pleasant. In India there was sort of a threat in the air. The streets are crowded and you get the feeling that the people are very excitable and there could be a sort of a mob effect. In Burma, the people are smiling more and seem happier. They are not having an easy time. The Pan American representative told us, he respects them a great deal because although they are having a tough time governing themselves (after the many, many years of being governed by other people), nevertheless, they are trying valiantly to run their own government, the best they can. If they are going to make mistakes, they are going to make them. You feel that the people of this country have a great deal of hope.

The large temple which is called Shwedagon is spectacular. The spires can be seen from all over the city. There are many steps leading up to the temple. Surrounding the base of the shrine, there are many similar shrines, each one has its own little god or Buddha inside. It was told to me, that years ago, if someone died, his heirs would build a little shrine at the base of the big temple. These small temples are beautifully built. They all seem to be replicas of the big temple. Each family as they go to pray, would stop in front of a smaller temple. In front of these temples is a small opening or gate. In it you can see the Buddha. The people bring flowers. They take water which they very tenderly throw on the Buddha, either to cleanse it or keep it cool. They are very devout people and so it seems to mean a very great deal to them. When we descended the steps we passed bazaars that sell all sorts of things that they use in their worship.

Like all of Asia it seems to be overpopulated. When we flew into Rangoon, we noticed the tremendous rice fields. There's more rice produced here than any other country, more, by far, than Japan. You see all the fields flooded, the beautiful green rice growing and plenty of water buffalo wading around through the fields. Water buffalo are tremendous beasts and it seems almost impossible that little children could get up on them. They must learn at a very early age because it looks as though some of them are not more than two years old riding and steering these behemoths." 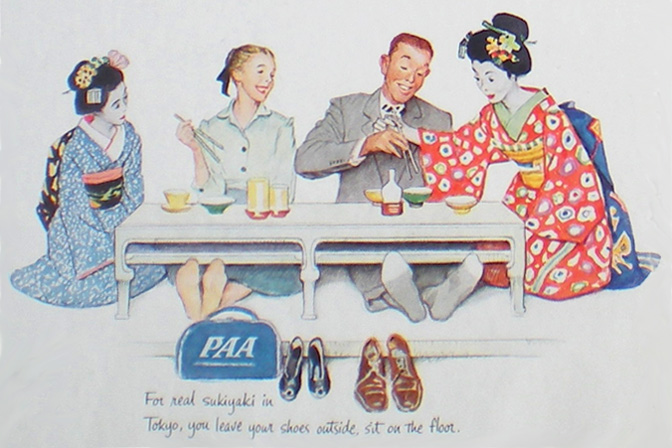 The final stop on the Asian leg of the tour, and the third and final scene for all of Asia.
It actually appears twice. A small B&W version is under the outrigger canoe on the next page.

Next, Part Four: Hawaii
Return to Page One