Around the World with Norman Rockwell
1955: Istanbul, Beirut and Karachi

(From the ad on the first page, kind of tucked away.)

BILL HOUSE: "I was on a camel this afternoon and what an experience that is. We found the camel, and right away Norman and Blackie said, "Alright, House, you're elected." So I got on this beast while he was down and going up was like riding on the scenic railway. Coming down was even worse.

After taking all the shots of Baalbek, we started back and on the road to Beirut, turned off to a little town for lunch. The restaurant, being open air, was nestled in a very wonderful little valley covered with trees, surrounded by steep mountains. Right through this little valley ran a stream. Tables were set on both sides. For lunch we started off with some ice cold watermelon and then had a local drink called arak which is a very potent almond flavored drink. Then the waiters came in with about thirty different Arabic dishes. Arabic hors d'oeuvres, consisting of yogurt, beans, nuts, and all kinds of strange vegetables. After hors d'oeuvres, we had some pounded raw veal mixed up with some sort of a salad. No one really knew what they were eating but it was very tasty and after that we had the regular shish kebab with another salad and sliced tomatoes. Everything was very unusual but very delicious. After a very wonderful Turkish coffee, we started back for Beirut. The check for lunch for four people, with endless dishes was $6.00 including tip. 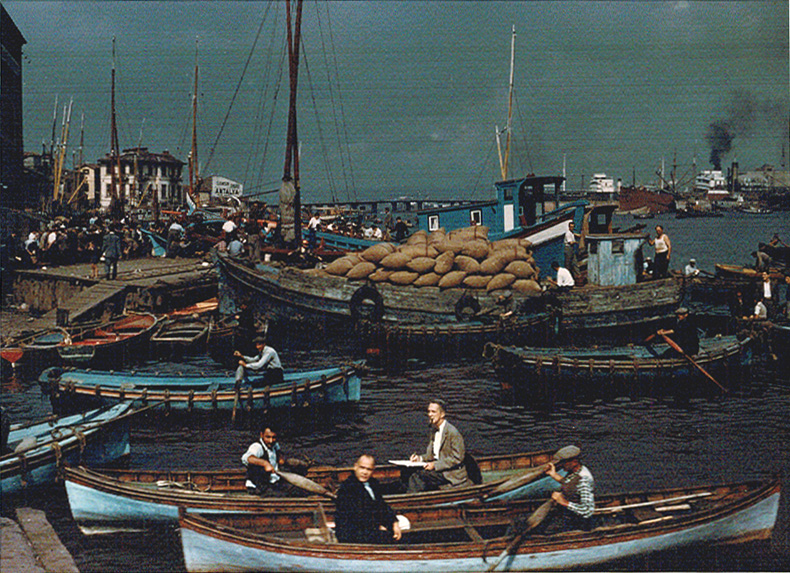 After about four days in Beirut, we took off on the Pan American flight around the world headed for Karachi. We flew along the Persian Gulf, passed over the Garden of Eden, over the Bay of Bengal, the Indian Sea, Persian Sea and finally getting to Karachi. It was a wonderful flight even though it was a long overnighter. In the morning we saw the Arab Dhows which slowly made their way from Mombassa in Africa to Karachi and its wonderful harbor. The Dhows are the same old ships, with the same lateen sails, that the Arabs have been using for 4,000 years. It is nothing very much, except a few planks and boards. They sit over the side with a few sails, but somehow they seem to get there.

Karachi is the capital of Pakistan. Pakistan is a new country which started around 1947 when most of the Moslems migrated from India. It has the aspects of a typical frontier town. When we arrived it was around 10 am and it was quite warm, in fact, 104 degrees. We had Pan American employees there to help us get through customs and a Pan American car drove us to our hotel, the Metropole. The ride to the Metropole was interesting, we saw camels again only this time they were pulling carts."

ROCKWELL: "Of course, I am getting a tremendous kick out of this whole trip and I certainly thank Pan American for the opportunity of doing it. It was very exciting and picturesque driving from the airport. The country was absolutely flat, there were no hills of any kind, terrific heat, native men wearing turbans, women wearing saris and veils. You see very few of the European dress.

When we got to the hotel, we had wonderful luck meeting up with a Pan Am cadre. This group was here to help the people of Pakistan develop commercial airlines. They invited us to eat at their mess upstairs in the hotel, a great help because the food that was generally served in the main dining room was not up to standard, especially when you are used to the good old American pork and beans."

BILL HOUSE: "One humorous occurrence as we arrived at the hotel, we had about fifteen bags and it took fifteen men to carry them upstairs. At first glance you would think the Metropole had been built many years ago, however, it was built around 1950, fashioned after the English style. It was built with a courtyard having balconies running completely around the interior. In the center were tables for dinner and dancing. The orchestra would play to the wee hours of the morning, keeping you awake. This was much after the Kipling atmosphere of years ago."

ROCKWELL: "Karachi is greatly overcrowded and as I understand it, there were only 70,000 people here several years ago and then the Moslem refugees came in from all over India and they now have something like two million. [Now it's over 15 million. Editor]

The first night after the orchestra stopped about 2:30 in the morning, I heard another sound that seemed like building going on right outside the window. I finally got to sleep only to be awakened a little while later, about 6 o'clock by a snake charmer outside my window piping his pipes. Blackie and Bill came into my room and we watched this spectacle. Blackie was not presentable at the moment, but I wanted to go down and photograph the snake charmer. The snake charmer got out a cobra, boa constrictor, python and many other snakes. The natives gathered around him and I was afraid we wouldn't see another one, but as you will hear later on, there were plenty of snake charmers and all that type of thing."

BILL HOUSE: "We met an old friend of Blackie Kronfeld's, Nelson Price of the Standard Oil Co. He invited us to his beach house about 16 miles from Karachi. We drove out to his place past the smelly native villages along the beach front and stopped at a fishing village. Nets were strung out over the ground being mended and dried, and the fisherman were getting their boats in shape. This is where we picked up lobsters for our dinners. We continued on to his place, changed into our swimsuits and went swimming in The Arabian Sea. Norman has something to say about the fishing village.

ROCKWELL: "This fishing village is very primitive and the thing that impressed me about it is that there was not a single thing about that village that was not right out of Biblical times. The costumes they wore, children, everyone, wore just what they wore during the time of Christ, and it was really very interesting. The men wore white turbans, white short bed sheets and the children, what they did wear, were in bright colors. As we were sitting there, a fishing boat came in, they have an out rig where a man sits on the side of the boat in order to balance it."

BILL HOUSE: "Nelson Price's little shack on the beach was set up on a high cliff. We walked down through a series of steps cut in the side of the sandstone cliff and went swimming in the sea. There was a wonderful surf and we all had a lot of fun riding the waves in. Norman and I were trying to catch some fiddler crabs. There were thousands of them running up and down the beach. We chased them around but we couldn't catch one. So we had to eat lobsters and buffalo steaks for dinner instead. After our meal, we motored back and got ready for our flight to India."

Next, Part Four: Asia
Return to Page One